Posted at 13:49h in Blog by Robert Francis James 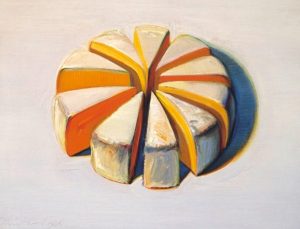 Reality has to be digested, it has to be transmuted by paint.

Wayne Thiebaud 100, the not-to-be-missed show now at the Brandywine River Museum, has awakened me to the primacy of cast shadows.

Radiant and rainbowlike, Thiebaud’s cast shadows are nothing short of delicious. After consuming a hundred of them, I’ll never take a cast shadow for granted again.

Following a suggestion by New Yorker critic Adam Gopnik, the curators claim that the California artist hoped his cast shadows would capture the “sudden glare of West Coast sunlight just after you take off your sunglasses.”

That’s as good a theory as any. 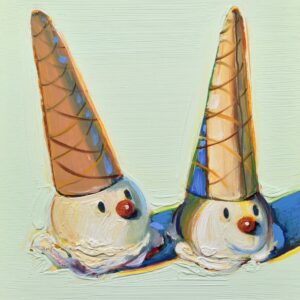 But it’s important to remember that all cast shadows are filled with subtle color variations, created by the light reflected from the object’s surroundings.

That’s true whether you’re painting outdoors in the summer in California or indoors in the winter in Delaware.

And all cast shadows feature two additional elements: the crevice (the dark line where the object contacts the ground) and the penumbra (the hazy zone around the shadow’s outer edge).

Most artists render these elements of the cast shadow faithfully, no matter where they live.

But Thiebaud rendered them differently, as the curators point out. He rendered the crevice and penumbra as halation—luminous haloes demarcating the cast shadow.

Thiebaud’s haloes transmuted—to borrow Diebenkorn’s word—reality, aping our perception of shadows (which, due to inbuilt edge-enhancement by the retina, always increases contrasts).

Thibaud’s paintings didn’t picture the real; they digested it, much like perception does.

So while his cheeses, ice creams and confections unleash your digestive juices, remember they’re meant to unlock your eyes as well. 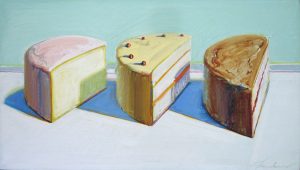