Posted at 10:08h in Blog by Robert Francis James 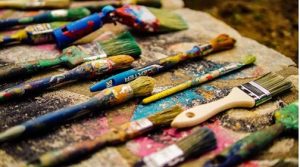 I’m flattered so many friends and acquaintances have taken well to my choice of an “encore” career.

At the same time, I’m saddened that I can only pursue painting as a career because I don’t depend on it for the lion’s share of my income.

My hat’s off to those painters—successful or not—who found the cajones to try in their youth to paint for a living.

Faulkner was right to say the artist “has no place in the mosaic of the American dream as it exists today.”

The average American artist, according to the Labor Department, earns $50,300 a year. That’s $10,000 less than a clerk at the post office (a job Faulkner held as a young man, until he was fired for throwing away mail).

Of course remorse isn’t good for the soul; and calling America materialistic is trite.

But as Wassily Kandinsky observed, “The nightmare of materialism, which has turned the life of the universe into an evil, useless game, is not yet past; it holds the awakening soul still in its grip.”