Posted at 15:58h in Blog by Robert Francis James

A museum security guard wasted no time in reacting.

In a “refreshing, no-nonsense approach to eco-warriors,” according to The Daily Mail, the guard tore the protesters’ hands from the painting and dragged them away.

They were promptly taken to a local police station and handed orders to stay out of Florence for three years, the same penalty given to rowdy soccer fans after their arrest.

Museum officials said the demonstration left Primavera unharmed, thanks to protective glass installed on top of it several years ago. 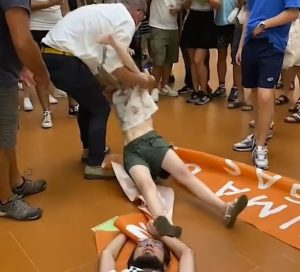 The Botticelli was targeted because it portrays an idyllic spring day—the kind of day that climate change threatens to extinguish.

Other paintings have been defaced for similar reasons this summer, including a Constable, a Van Gogh, and a Da Vinci—the Mona Lisa, no less.

I sympathize with the activists; applaud their passion; and would defend their right to protest.

Why not target an offshore drill, a gas pipeline, a utility plant, an energy company’s headquarters or the CEO’s limo?

Deface one of those things, if you want attention to your cause, but keep your hands off art!