Posted at 14:50h in Blog by Robert Francis James 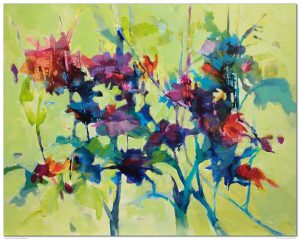 Life is a great big canvas; throw all the paint you can at it.

I won’t disclose all her trade secrets, but will share that her painting began pretty wildly, at least in comparison to the way I start a painting. 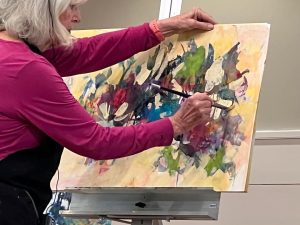 First, she lathered her blank canvas—in reality, a big bristol board—with gesso and some vivid acrylic paints squeezed straight from the tube. She mixed the two together, and then began slashing and scraping the mixture with a beefy rubber potter’s rib.

From there she continued to paint on top of her surface with a large brush and more acrylic colors that she squeezed straight from the tube.

She painted her floral painting in about two hours, without a reference of any kind.

From her confident pours, scrapes, and brushstrokes, you could tell she’d ridden in this rodeo before.

And she spared no paint.

Watching Ms. Schlenker paint reminded me of the original reason I jumped into drawing and painting 12 years ago.

While with my wife at a week-long plein air festival on Maryland’s Eastern Shore, I watched a lot of artists in action. Most of the artists were second-act artists. The spectacle put in my head the notion “Someday, I’ll do that too.”

I enrolled in a drawing class a week later.

Polymaths fascinate me, so I was delighted to learn this week the comedic actor Danny Kaye fit this category (I’ve always liked his Borscht-Belt screen presence.)

Kaye was a Broadway actor, a Hollywood actor, a nightclub comic, a gifted impressionist, a singer, a dancer, an orchestra conductor, a celebrated mondain, a philanthropist, a UNICEF goodwill ambassador (the first), a skilled golfer, a baseball-team owner, a professional pilot,, an accomplished night-school teacher, and a prize-winning chef.

Perhaps his roots as the son of poor immigrant Jews from Brooklyn spurred him to “go for it.” But, whatever his motive, Kaye never spared the paint when it came to his canvas.

Massachusetts painter Emile Gruppe famously said, “The more paint I have on, the better the painting.  I tell students to paint like a millionaire.”

A sound philosophy, wouldn’t you agree?

Above: Garden Party by Cheryl Schlenker.