Posted at 08:12h in Blog by Robert Francis James 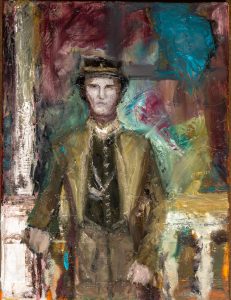 Little souls who thirst for fight,
these men were born to drill and die.

Like 190 thousand other Irishmen, Mike Folliard, my cousin six times removed, fled County Roscommon in the 1850s to escape starvation.

He wound up living on a farm outside leafy Franklin, New Jersey.

Mike was 18 in late July 1861, when Congress authorized formation of an army of 500 thousand volunteers—a call to arms that was immediately met by men like Mike, who enlisted for the thrill of marching into battle and the steady paycheck promised (Mike mailed all his army pay to Ireland, as boat fare for a widowed sister).

On August 27, Mike was mustered into the 1st New Jersey Cavalry (the “Jersey Cavaliers”) at Trenton. At some point the next month, while stationed in Washington, DC, he visited a photography studio—likely that of Matthew Brady—to have his portrait taken in his handsome, new uniform.

That was the last time he’d do anything so civilized.

Just a few weeks later, he found himself in Virginia, riding scout to defend the capital from Confederate takeover.

Cavalry was used throughout the Civil War as an infantry commanders’ “eyes and ears,” so Mike’s regiment was nearly always exposed to enemy fire.

During the latter engagement, in October 1863, Mike was captured by surprise outside a village known as Buckland. The cavalry officer who allowed Mike’s regiment to be entrapped, as it had been, was none other than General George Armstrong Custer.

Mike was summarily transported to Andersonville Prison in Georgia, where he lived among 45,000 other Federal POWs inside a stockade surrounding 16 acres of land (the size of three city blocks).

As it was to many other prisoners, Andersonville was unkind to Mike.

A thousand other POWs at Andersonville died, as Mike did, of a disease brought on by starvation.

Above: Little Soul by Robert Francis James. Oil on canvas. 11 x 14 inches. From an 1861 photograph of Corporal Mike Folliard, who is buried in grave Number 3938 at Andersonville National Cemetery.