Posted at 10:18h in Blog by Robert Francis James 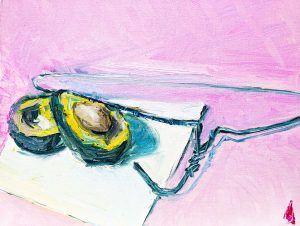 We live in a political world.

The notion behind this post came to me a week ago, but I felt no urgency to pursue the idea until late last evening, when POLITICO announced that the Supreme Court has voted to strike down Roe v. Wade.

My notion is simple: even though we can’t escape the latter, painting and politics don’t mix.

My proof of that statement is my difficulty selling Judging Amy, a still life I painted in October 2020.

It commands a lot of attention at art fairs, but no one has ever asked about its price (like all my small paintings, $140).

Despite it’s stopping power, I just cannot sell it.

Convincing arguments in favor of political painting most often claim that when a painter depicts a political truth—as Picasso did in Guernica—it’s truthier than the same political truth as told by, say, a journalist.

The late historian Howard Zinn made this argument.

“Artists lend a kind of spiritual element to reality which enhances the truth,” he told Resonance Magazine in 2003.

“There are huge numbers of people in the world whose lives are lives of sheer misery, sickness and violence. In order to change that you need to have artists who will be conscious, who will use their art in such a way that it helps to transform society. Art may not be a blunt instrument, but it will have a kind of poetic effect.”

But just as convincing are the arguments that disfavor political painting.

They most often point to the self-indulgent nature of it: political paintings display a vacuity that mirrors politics itself.

Art critic Peter Schjeldahl made that argument in 2006.

“My problem with political art is not that it’s bad art necessarily, but that it is terrible politics,” he told Guernica Magazine.

“What are we talking about with a political artist? We’re talking about a closeted person with minimum contact with reality—who has trouble tying his fucking shoes! And he’s supposed to be political? A bus driver has a better perspective on things. Artists are completely indulgent.”

As an example, Schjeldahl pointed to Velázquez, who painted many political paintings.

Velázquez only managed to avoid ugly self-indulgence because he was “the greatest painter who ever lived.”

In contrast, his contemporary Rembrandt, “the second greatest painter who ever lived,” painted captivating pictures aimed solidly at his middle-class patrons. I must admit I have to side with Schjeldahl.

After the unsalable nature of Judging Amy, I need to remind myself: if I ever feel like climbing on my soapbox again, I’ll stop.

Maybe I’ll paint it, instead.

It worked for Warhol, after all.