24 Apr The Birth of Art History

Posted at 17:16h in Blog by Robert Francis James 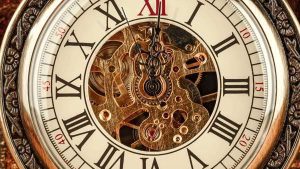 Ever since Plato, Western philosophers have studied art.

So much so that in the 17th century, German philosophers, big on classification, saw fit to create a separate branch of philosophy they called aesthetics, a term derived from the Greek aisthetikos, meaning “about perception.”

The German philosopher, Georg Wilhelm Friedrich Hegel, went a step farther in the the 19th century to create a separate branch of aesthetics that we know today as art history.

History was a big deal to Hegel, whose greatest contribution to philosophy was the famous idea of the dialectic.

The dialectic, Hegel said, is a “grand narrative arc” that moves pendulum-like, unfolding in stages from thesis to antithesis to synthesis.

Each tick-tock of the dialectic reveals another facet of the ultimate reason for the universe, which Hegel called spirit (Geist).

The philosopher’s ideas about art were transcribed from lectures he gave in the summer of 1818 at Heidelberg University and collected in the posthumously published Lectures on Aesthetics.

As the lectures reveal, Hegel believed that art—like everything else—was bound by the dialectic, and that art makes known the unfolding of spirit in material form.

In other words, operating dialectically, art gives form to ideas that lack any other material expression.

Art’s purpose, he believed, is to evoke through our senses spiritual truths that would otherwise remain unknown.

He compared art to a mirror the artist holds up to spirit (in “Hamlet,” Shakespeare said art’s purpose was “to hold as ‘twere the mirror up to nature”).

Art is “spirit appearing in the sensuous,” Hegel said. In his masterpiece, Phenomenology of Spirit, Hegel even called spirit an “artist” (Geist ist Künstler).

Art history, therefore, is the “history of spirit” (Geistesgeschichte).

The history of art—the story of artistic production across different centuries, nations, and cultures—reveals spirit made known to mankind though the sensuous.

“In works of art, the nations have deposited their richest inner institutions,” Hegel said, “and art is often the key to understanding their philosophy and religion.”

Hegel believed not only that art revealed spirit, but that art history is progressive (as is the dialectic).

The Symbolic phase Hegel called the era of “pre-art” (Vorkunst). It includes the “primitive” art produced by the the Persian, Zoroastrian, Egyptian, Judaic, and Islamic cultures. Those works pointed to spirit.

The Classical phase is that of Greek antiquity. Unlike symbolic art, classical forms embodied spirit in the form of perfect beauty.

The Romantic phase is is that of Christian art. It depicted the incarnation of spirit; or, as the Bible says, “God made flesh.”

The Modern phase, compared to its predecessors, represents the “disintegration” (Auflösung) of art. A highly conservative judge of art, Hegel wasn’t keen on our own phase of its history.

Modern art, Hegel said, “invites us to intellectual consideration, not for the purpose of creating art, but for knowing philosophically what art is.”

In other words, Modern art is theory.

Hegel was prophetic, in this regard, predicting that Modern art would comprise works like those of Cezanne, Duchamp, Rothko, Pollock, de Kooning, Warhol, Christo, Johns, Mortherwell and Twombly.

Hegel’s critics are legion and quick to call him “Eurocentric”—”racist,” “nationalist,” “fascist” and “colonialist.”

There’s some truth in those criticisms.

But one thing you can’t call Hegel was short-sighted.

He was the first to connect art appreciation to art history.

We can’t really understand art unless we grasp what it was—and why it was that way.