Posted at 11:55h in Blog by Robert Francis James 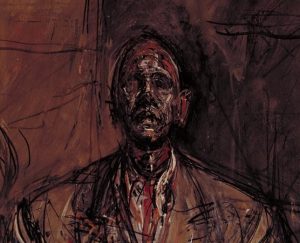 At the core of all well-founded belief lies belief that is unfounded.

Like perception itself, they’re precarious (the phenomenologists held that “it is the essence of certainty to be established only with reservations.”)

Artists who aren’t painters attribute Giacometti’s hesitant brushwork to the artist’s self-doubt (Stanley Tucci did this in his exquisite biopic Final Portrait).

Giacometti’s brushwork is attributable to something much grander: Cartesian doubt.

Tentative brushwork like Giacometti’s represents to me the thinking person’s only permissible response to the world as we know it.

Only the child and the unthinking adult live in a world they believe is grounded and accessible to everyone—a so-called “objective” world.

The thinking person knows that his take on reality is finite; that nothing he believes is grounded, obvious, or self-evident; and that his view is only one viewpoint, one fragment, one snapshot.

There are infinite viewpoints, infinite realities.

“The object of art is not to reproduce reality, but to create a reality of the same intensity,” Giacometti once said.