Posted at 20:06h in Blog by Robert Francis James 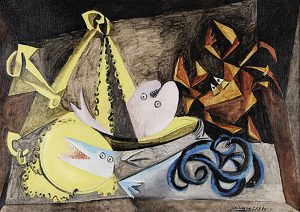 Unlike a painting, food is an impermanent, fleeting art form.

Ever since the cave painters of Lascaux, painters have depicted food.

Picasso was no exception.

But while depictions of food in still-lifes had traditionally celebrated abundance, Picasso’s depictions—at least during World War II—were meant to remind viewers of an opposite state, deprivation.

Like all fellow citizens, Picasso experienced relentless deprivation during the Occupation of Paris, when the foodstuffs trucked into the city were commandeered by the Nazis, leaving residents to get by on mere table scraps and the meager yields from backyard box gardens and chicken coops.

So it was no surprise to his friends that Picasso painted still-lifes of food throughout the Occupation, four hard years when a “growling stomach was the Frenchman’s true voice,” as the writer Alfred Fabre-Luce said.

“There was nothing to do but work and struggle for food,” Picasso told Vogue at Paris’ Liberation, “and look forward to the day of freedom.”

To escape the dreary capital, Picasso commuted as often as possible to the seaside resort of Royan, where the local fishmonger’s stall provided the artist inspiration. 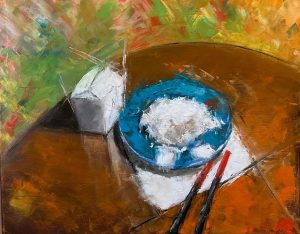 Picasso completed numerous still-lifes of Royan’s seafood during the Occupation, including Spider Crab, The Soles, and Crab, Eels and Fish, as well as portraits of other taste-treats he happened upon in restaurants back in Paris, such as Still-Life with Blood Sausage, Buffet at the Catalan, and Sideboard at the Catalan.

Although Americans today gripe about food shortages and empty shelves at the grocery, compared to Parisians under the Occupation, we have no business complaining.

And in fact American painters who depict food today—myself included—work within the tradition of still-life painters that dates back to those prehistoric cave painters of Lascaux.

We celebrate food and memorialize the feelings of abundance, hominess, wellbeing and magic that food brings us, each and every day.