Posted at 11:57h in Blog by Robert Francis James 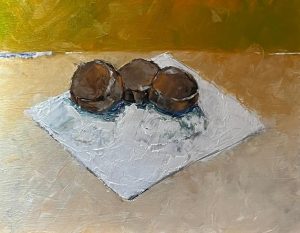 Hold onto your taste, even when you’re embarrassed by it.

Connoisseurs and critics often look down on art that’s driven by pop culture (the source of the “pop” in the term “pop art“).

I guess I’m a child of the ’60s, because I love pop paintings and subjects.

New York critic Jerry Saltz nails it when he says of pop subjects, “Never renounce them for the sake of others’ pieties.

“Own your guilty pleasures.”

My latest stab at depicting what I term a “nostalgic goodie” is Ding Dongs.

I could just have well titled the painting Ring Dings.

Ding Dong aficionados know that in 1967 their maker, Hostess, engaged in an all-out, take-no-prisoners brand war with Drake’s Cakes, the maker of Ring Dings, by copying the latter’s immensely successful product.

The bloody war, known to history as the “Ding Dong-Ring Ding Conflict,” lasted for nearly 20 years. Hostess only won by buying its rival.

If you’re anywhere near Delaware in the next 10 days, be sure to drop into my solo show, Cold Comforts. It features 30 paintings of food.

And if you’re not near Delaware, pop onto my website.

I decline to accept the end of man. It is easy enough to say that man is immortal simply because he will endure: that when the last ding dong of doom has clanged and faded from the last worthless rock hanging tideless in the last red and dying evening, that even then there will still be one more sound: that of his puny inexhaustible voice, still talking.