Posted at 13:11h in Blog by Robert Francis James

Informally, I call many of my paintings depictions of “nostalgic food.”

Viewers who react to these paintings usually respond with cheer, and will immediately mention memories of childhood. 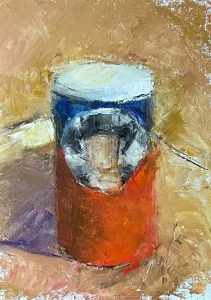 Right now, I’m trying to capture a Moon Pie, next to the Choo Choo, Chattanooga’s greatest claim to fame.

The term was coined in 1688 by Swiss physician Johannes Hofer.

He wanted to name a psychosis prevalent among soldiers and handmaids that was similar to paranoia, except that sufferers were manic with longing, instead of persecution.

The psychosis was nothing new.

Throughout the Thirty Years War, which had ended in 40 years earlier, nostalgia had so afflicted Switzerland’s soldiers that anyone who played an old-time song in camp at night would be put before a firing squad.

While no fan of mindless nostalgia, I find that still lifes composed of tasty, American “consumer products” are quaint reminders of the “embarrassment of riches” represented in the still lifes of the Dutch Old Masters.

Like the 17th-century Dutch, contemporary Americans enjoy an embarrassment of consumables; but, unlike the Dutch, we all don’t need to own profitable trading companies to enjoy a little wealth.

That might be what makes nostalgic food so intrinsically magical.